“Coffin’s marvelous memory for detail…is well matched by a gift for prose that is both elegant and unpretentious….A Yankee Proust,…Coffin’s memories document our changing national identity….His memoir is a priceless, first-person history…an immersion in the kind of community we’ve all but lost:: a time and place when the most important experience we shared was each other.”
—William Craig, Woodstock Magazine

“This memoir may be specific to a man and a town, yet it feels universal, not unlike Russell Baker’s memoir Growing Up. Anyone who loves the singular character of Vermont will enjoy Coffin’s book.”
—Deborah Straw, Vermont Life magazine

“…nostalgic but enlightening…Coffin writes elegantly and endearingly of the people who lived in his town…what emerges in his pages is a community where people genuinely did care for their neighbors and looked out for one another.”
—Louis Berney, Vermont Sunday Magazine (Rutland Herald/Barre Times Argus)

“It’s obvious throughout this wonderful book that the long light of those days does still reach Coffin, and with a remarkable clarity….If you grew up in small town America, … this book will draw you in….This beautifully written book…reaches all of us.”
—Chuck Gunderson, The Vermont Standard

“This is a story of a boy and a historical snapshot….The charm of entering another era…is our compensation for putting up with the anxious present.”
—Dan Mackie, The Valley News

"Since its publication in 2005, Bruce Coffin’s beautifully written account of growing up in Woodstock, Vermont, in the 1940-50s has become a New England classic. The details of life in a typical Vermont village — the work places and stores, the sports and pastimes, the landscape, and, most of all the people — are affectionately recalled in a Proustian feat of memory and imagination. In these unexpected details the essence of a complex, microcosmic world is recaptured and brought back to life.

Informative, authentic, and thoroughly entertaining, The Long Light of Those Days is a delightful historical memoir. In this account of growing up in a New England village in the 1950s, Bruce Coffin has lovingly preserved an era, a place, and a cast of characters unique to them both."
—Howard Frank Mosher

"Bruce Coffin had the great good fortune of growing up in one of New England’s most lovely villages, and the wit and wisdom to write insightfully and lovingly not only of that place but of the lost empire of childhood."
—Jeffrey Lent

"Bruce Coffin’s recall is fond, accurate, and detailed; he doesn’t miss much. Readers of a certain age, especially those familiar with small rural towns, won’t be able to resist his Woodstock, Vermont. They shouldn’t try."
—Castle Freeman, Jr. 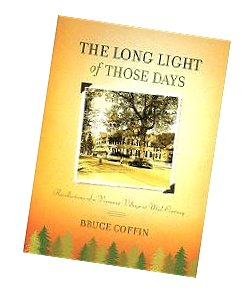